Look at the stash that came in this week's post! I've not been spending like crazy though - it's almost all stuff I've been waiting for and paid for ages ago.

First (Tuesday), remember my lost round robin fabric from early September? Well it never arrived, so Silkweaver kindly re-sent it out. Of course, it's too late now (and I changed my mind about the colour fabric I wanted anyway), but I ordered some little cuts of linen and some cute buttons with it, so I'm very pleased to see it all! 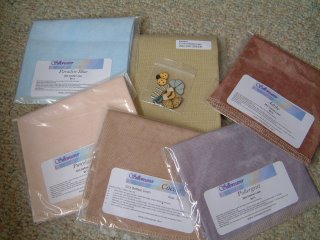 Then (Thursday) my sale order from the Stitching Bits and Bobs sale turned up - some of it was on backorder so I've been waiting nearly a month for it. I added a couple of things to The Token and the JCS Ornament issue I wanted - a Quaker stocking and two of the Carriage House Samplings letters. I love these letters and hope to do them over one at some point, just like Patti. So I've started collecting! 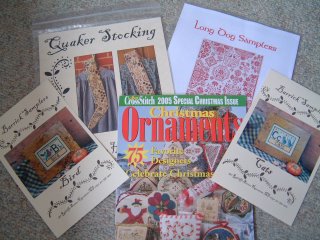 And then (Friday) I got an Elizabeth Bradley kit I ordered in September from Traditional Stitches! (It had to come surface mail it's so big.) I love Elizabeth Bradley and it was a limited edition and 25% off - how could I refuse?! I got a couple of old magazines for my September stash collection programmes too! 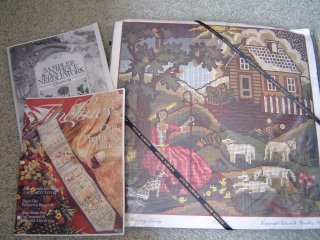 And last (Today), but not least, two more magazines from Traditional Stitches (the November ones for my collection programme), and two pieces of fabric from Countrystitch. (There's a 25% off sale until the end of the month!) One is 32ct lugana in Haystack, which will be perfect for my TWRR next year, the other is 32ct Belfast in Oyster. I was thinking of using this for The Token, but now I see it I think it's maybe a bit brown and it would work nicely for the rest of my Celtic Quilt. That means I may have to order more fabric for The Token! 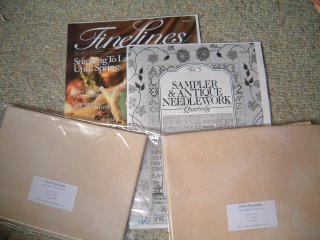