As promised, here's my progress on Dawn's RR. I have the sky (half stitches, so it'll be quick), more sand, a couple of things on the sand, and a load more backstitching to do. Hopefully it'll be done by the weekend and can go in the post on Monday. 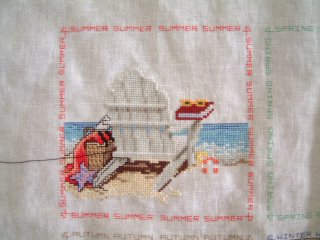 Carissa (thanks for visiting and leaving a comment!) asked about joining RRs. This one is a bit of a one-off, but I've joined another RR through The Worldwide Round Robins board. It's only just started, but the ladies on it seem nice. You have to fill in a questionnaire to join any of their RRs, but it's not a big deal. I've also spotted RRs on Stitching the Night Away, but you have to pay a membership fee, which puts me completely off.

Update: Look what the postie just delivered! Birthday gifts from Cathy as part of the 'Adopt a Stitcher' exchange! 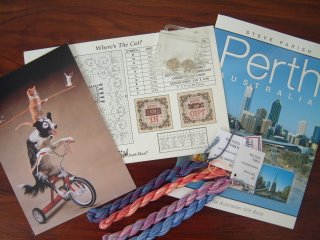 Thank you so much Cathy! I have a cute Just Nan chart that says 'Kitty In' for one bit and 'Kitty Out' for the other, with the beads to go with it (isn't it asking to be stitched as a double sided cushion?) And some Dinky Dyes silks, and a booklet on Perth, and another great card! Thank you!! I really appreciate it.

And a P.S. on the RR front: I just spotted that Renée is going to set up another RR, so if you're interested pop over and email her. I'm too busy, but I loved being in this RR that she organised! Thanks Renée!
Labels: exchanges round robins