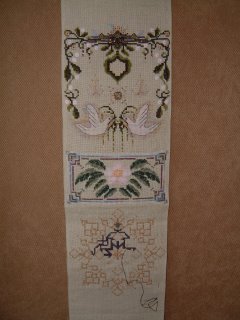 It's been so long since I worked on this! Last year some time. Other things have got in the way. Anyway, I pulled it out for the Stitchathon on the Friends Gather board, but sadly stitching time was a bit limited over the weekend. And I discovered most of the cross stitch on part 4 is in metallic thread - not my favourite! Still I got a little done and I think I might make it my Stitchathon project each month.

Talking of Chatelaines - I forgot to say Alpine Garden Seasons arrived safely in the UK in time for my parent's anniversary and they LOVE it! They were a bit choked up on the phone about it. My mum doesn't embroider at all but she has a couple of friends who are very into the Embroiderer's Guild and she's been showing it off to them proudly! They've been pointing out all the different speciality stitches to her!

Other friends of theirs emailed me some photos of some of the anniversary celebrations - so kind of them. So here's the Golden Anniversary couple! 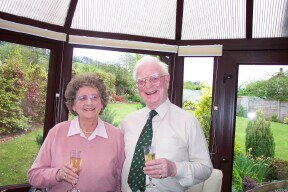