What's up with Blogger? It's taken about 5 hours to get on here today! Hope they've fixed whatever was the problem...

Here's the promised closer pic of the blanket-to-be. I popped down to my LNS earlier and they had all the threads (would you believe they have four makes of embroidery wool) and a choice of blanketing colours in the right size cut. How I love having such a wonderful store nearby! The green was a bit yucky so I chose a blue. I thought it wouldn't show marks as much as a neutral!!! 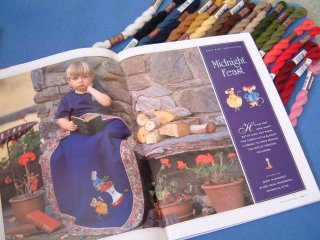 Now I just have to transfer the design on to the blanketing - a step I hate. I always just want to start stitching right away!

Oh, and yes I do have ten nieces and nephews (two on DH's side and the rest on mine)... and four great-nieces and nephews. I don't know any of them well though - it's a complicated story I won't bore you with!
Posted by Nicki at 2:30 pm
Labels: general embroidery, life in general