I don't usually post twice in one day but look what Martina of Chatelaine Designs is coming up with next.... A Pompeiian Garden. She announced it was on the way a while ago and I've been waiting eagerly for the screenshot. Although it's a surprise to see a big villa, I love it! (The group starts in September and there's a link on the Chatelaine BB for further info) 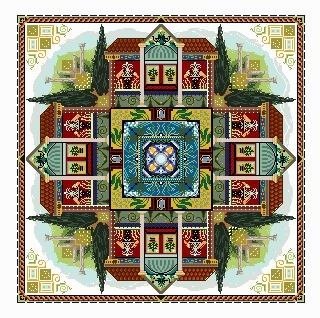 I know I won't be starting this in September - way to much to do and these are so expensive anyway - but I will be doing it as soon as I can. I have a REAL thing about Roman history! (And yes, I know doing that villa four times is going to be tough, but these big mandalas are so worth it!)
Posted by Nicki at 3:25 pm
Labels: Chatelaine designs