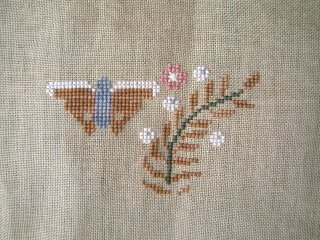 Karen - you can take off that 'maybe' next to my name on your list of Quaker Garden SALers!

This was last night's stitching! Quaker Garden on the recommended R&R linen with GAST and DMC (for economic reasons! - 3033 instead of Shaker White and 935 instead of Caper). The linen is a lot greener than this in reality. I did the middle of the pink flower in white instead of the suggested pink - it's nice to be a bit different!

It's my first time stitching on R&R linen and on 30ct and I really like it. My stitches seems to lie nicely on this count and the coverage is good too. But the linen smells REALLY strongly - a sort of musty linen smell. Is this a R&R thing does anyone know or is it just my piece?
Posted by Nicki at 1:22 pm
Labels: Blackbird Designs, Quaker samplers, stitch-a-longs