It's Friday! Yippee! I'm hoping to pick up my Quaker Garden from the framers later! The pic for that will have to wait though as here's

"So, last week, we asked if you ever feel compelled to cook or eat the kinds of food described in the books you read.

This week, the question is about the locations of the books."

1. Have you ever wanted to travel to a place described in a book?
Yes, all the time! That is, if the book is good and the descriptions sound realistic. A quick glance in the cupboard at the books nearby brings up Egypt (Elizabeth Peters' Amelia Peabody mysteries), the Alps (Elinor Brent Dyer's Chalet School series), San Francisco (Armistead Maupin's Tales of the City series), Glastonbury (various Arthur stories) and many more. I'd love to visit Marion Zimmer Bradley's Darkover too - so my wish to travel isn't restricted to just real places! 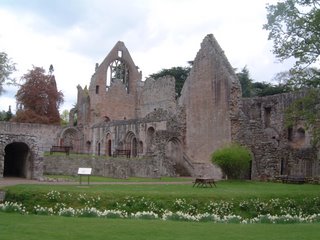 3. And if so, did it live up to the expectations, feelings, emotions you expected from the book? Did you feel like Anne was going to come romping around the corner of Green Gables? Was it as if Jo was upstairs at Orchard House, scribbling on a story? Or was it just a museum, or just a city street? Like Abbey Road without the Beatles?
I could really see the Abbey Girls at Dryburgh, dancing on the garth...
Posted by Nicki at 12:10 pm
Labels: books