It was another SAL on the HAED BB this last weekend, and I decided to work on Tomboy. It was supposed to be a UFO SAL, and she's definitely not a UFO, but it was just what I needed. I did a bit of sky and only used three colours - very soothing! 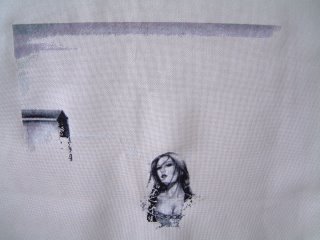 And here's the after. It doesn't look very different but I promise you there's an extra couple of thousand stitches in there! 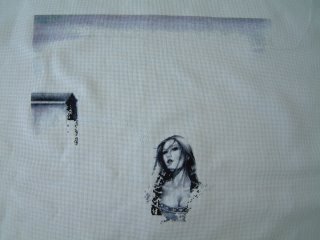 It was a rough week last week. Polo is still in the spare room and although she's being very good there were a few nights when I didn't get much sleep. She was limping about mewing and Lulu was scratching at the door to get in (she just refused to eat from her biscuit bowl and kept trying to get to Polo's). Then I pulled a muscle in my neck or trapped a nerve. It was very painful and gave me a permanent headache too. Then DH had a flare-up of a recurring eye problem so was in pain, demoralised, and worried about his sight. So there were three of us trapped in the house, short of sleep and in pain, with one confused demanding well cat! Thankfully my neck pain has eased off now and just aches a bit, DH's eye is on the mend (although he can't go out in the sun or do much yet), and Lulu seems to have settled down a bit. Polo is limping but definitely getting better. The sleep is still in short supply but it could be (and was!) worse!
Posted by Nicki at 10:31 am
Labels: cats, Heaven and Earth designs, life in general, stitch-a-longs