It's SAL weekend for Karen and I on the Carriage House Samplings alphabet. Here's mine - E for Elephant. 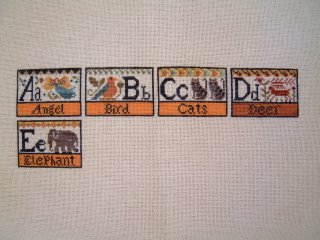 (1 over 1 on 28ct Haystack lugana from Countrystitch)

I've also finished my needleroll for the needleroll exchange and I've almost finished Petal Fairy! And the first of my recent batch of secret stitching has arrived safely and quickly - I'll show you a picture tomorrow.

I'm getting a lot of stitching time at the moment because I've been sitting in the spare room keeping Polo company for quite a lot of each day. Martin and I have been taking it in turns to sleep in there too - we've put a matress on the floor. Polo's slowly getting better, though we had to go back to the vet for a stronger painkiller. She was shaking all over when it wore off, poor thing. She's hopping well now and starting to put her foot down when she rests. She's also bored but resigned to being stuck in one room. Lulu is another matter - she's being a pest, wanting loads of attention because she's confused about what's happening. She won't leave us alone at all!

Because I'm spending a lot of time with Polo (and Lulu!) I have a lot less internet time. I know I owe a few people emails, so I'm sorry - I will get round to it soon! I'm also finding it hard to spend time commenting on everyone's blogs, so apologies for that too. You're all doing beautiful work!
Posted by Nicki at 4:23 pm
Labels: Carriage House Samplings, cats, CHS alphabet, over one stitching, stitch-a-longs