First, here's my first ever round robin, finally framed! 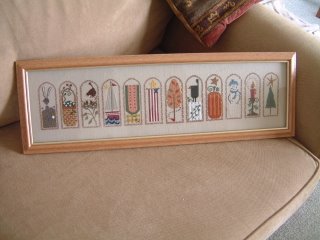 This is the one I got back in April but I've been dithering about where to put names and haven't got round to having it framed. In the end I just picked it up as it was and took it to the shop! I like it plain and I'll put our names on the back so I won't forget. Thank you so much to Laurie (Spring), Renée (Summer), and Dawn (Winter) for stitching on it!

Secondly, I joined the pay it forward group from Tash's blog. Five people will get a little something from me (hand-made) some time in the next year. If you'd like to be one of the five, ping me an email (address in my profile) with your postal address. The catch is, if you ask to be one of the five you'll have to do the same for five other people. If I don't get five emails I'll just pick five people randomly! (But they won't be obliged to send gifts on because they didn't sign up and that wouldn't be fair!)

I won't be sending gifts for a while yet though, which brings me to the last thing. I'm stitching a couple of gifts for blogging friends but I won't be sending many gifts for Christmas. I think I'll save things for birthdays or surprises at other times of year! It gets too much trying to do everything for everyone all at once. I hope no one minds!
Posted by Nicki at 3:03 pm
Labels: round robins