Well, we're back from Dublin. I have to say it was a rather wet holiday, but then it does rain a lot in Ireland! It rained on the train trip across the UK, it rained on the way to the hotel, it rained in the evening, it rained all day the next day, and it was drizzling when we left. Hey ho. But we did get to see a fair bit of Dublin and had some great food and good Guinness!

On to the stitching now. Paula emailed me to say she received the Shepherd's Bush exchange I stitched for her, so here it is. 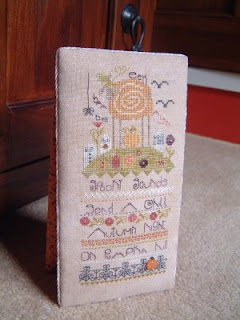 It's Pumpkin Hill stitched on the recommended fabric with the threads from the kit. I know Paula likes Halloween designs so I chose something spooky for her. Not my usual thing but I loved doing this - the colours were so pretty.

I did get a little stitching done on holiday - I took St Reatham for the train journeys. We'd hoped it would be fun to see a bit of the country so decided to travel by train and ferry. But the one over was really disappointing. I'd booked seats with a table, but we got two squashed at the end of the carriage with no table or window and just facing the backs of other seats. The train was packed, so it wasn't until two-thirds of the way across that we got to move and see out.

Coming back our ferry was cancelled (never, ever travel on Irish Ferries - they were so rude and unhelpful!) and at one point it looked like we would be arriving in Wales at midnight and sleeping in a station for the night. But Stena came to the rescue and we actually ended up seeing a lovely bit of Dublin we wouldn't have gone to otherwise and travelling with a nice Irish lady who'd also been abandoned by Irish Ferries. And we managed to grab nice table and window seats on the train and had a view all the way back. The train was 40 minutes late so the whole journey took about 13 hours, which is ludicrous, but it could have been a lot worse - we could be stuck completely like people trying to get on Eurostar or with holidays with XL. So, all in all, a not bad break. I'd have loved some sunshine and a bit longer but it was still good!
Posted by Nicki at 10:21 pm
Labels: exchanges, life in general