Not an awful lot of stitching has been done over the last few days because I have a new toy. At long, long last I have an iPod! It's red (of course) and I love it. I've spent hours uploading all my CDs and already made it a nice cosy pouch following the instructions here. My pouch isn't half as neat as the one in the tutorial but it'll keep it nice and scratch free. 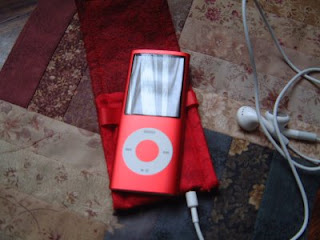 Now I'll have something to listen to on the train instead of teenage chatter and mobile phone business-speak from men in suits. It's hard to tell which is more stupid at times - is a conversation on which celebrity is the 'fittest' less sensible than one on 'thinking outside the box'? I'll be able to stitch St Reatham quite merrily. And talking of St Reatham - I'm on my fourth page now... 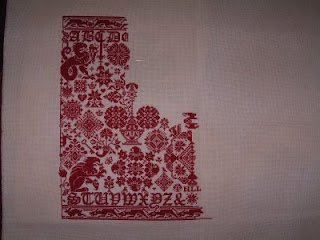 I've also finished the stitching on my exchange for Isabelle - just the finishing to do. And I've done another pieced block and the first applique block for the Antique Flower Garden quilt. As my first major attempt at applique I'm really pleased with it. Another three to do and I'm caught up (there are two or three per month so a lot to do).

I'll leave you with a photo of Trevor. We moved the back door mat yesterday so we could sweep and he promptly pounced on it! Hasn't he grown? He's a real tom cat now. 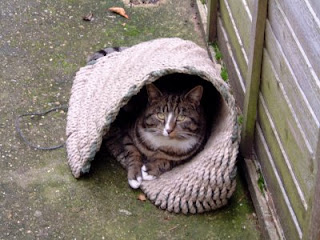 Hope you're all having a great weekend!
Posted by Nicki at 12:46 am
Labels: Antique Flower Garden BOM, cats, life in general, over one stitching, patchwork and quilting, redwork