It's amazing what you can do when you get a weekend off! I'm refusing to do any chores, so the house and garden are still a mess, but I have actually finished not one, not two, but three mitts!

To be honest, two just needed buttons. The knitting has been done for over a month but I haven't had a chance to go shopping. But we eventually made it to Hobby Craft and they are now finished. I'll save a photo for another day and share the result of a couple of hours watching Wimbledon on the TV instead. 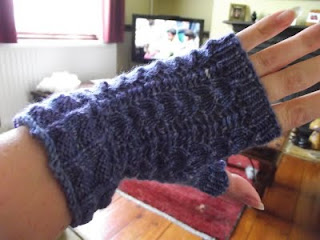 This is an Eliza mitt, again by Anne Hanson, and has been half done for ages. It's for the MIL for her birthday, so just one mitt and a neckwarmer to go. I had good company while knitting as you can see... 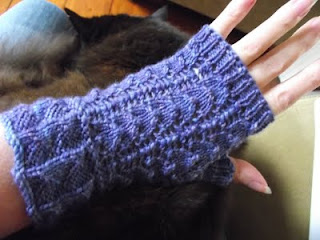 Lulu doesn't care what goes on above her head as long as she has a lap!
Posted by Nicki at 10:36 pm
Labels: knitting, mitts