I lied, I do have some stitching to show you! Here's an update on St Reatham, which got stitched on the train journey to Dublin and so has now been worked on in three countries - England, Wales and Ireland. 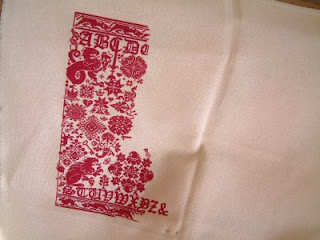 I've finished page 2 and made good progress on page 4. Here's a close up showing the poor little bunny being chased by all those dogs! 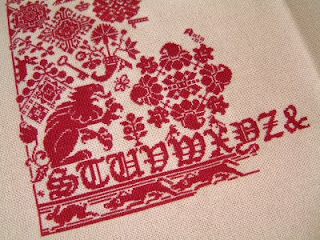 And I did a little bit on Royal Holiday - just some of the tiara and stuff in her hair. I know I said I was going to work on Pompeii, but I suddenly realised that if I want this done for Christmas I need to get a move on! Not sure I can do it but I can try. 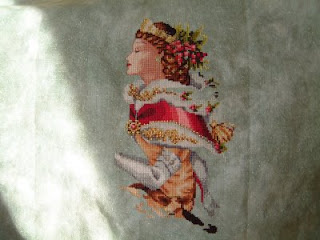 As you can see from the photo the sun has arrived! It's glorious outside today - not a cloud in sight and beautiful. After the gloomiest August on record (half the average sunshine and twice the average rainfall), and a miserable July and first two weeks of September, it's fantastic to see some sun. I felt like I was getting SAD already. So it's out into the garden today to do some tidying, weeding, and planting of bulbs!
Labels: Mirabilia over one stitching redwork